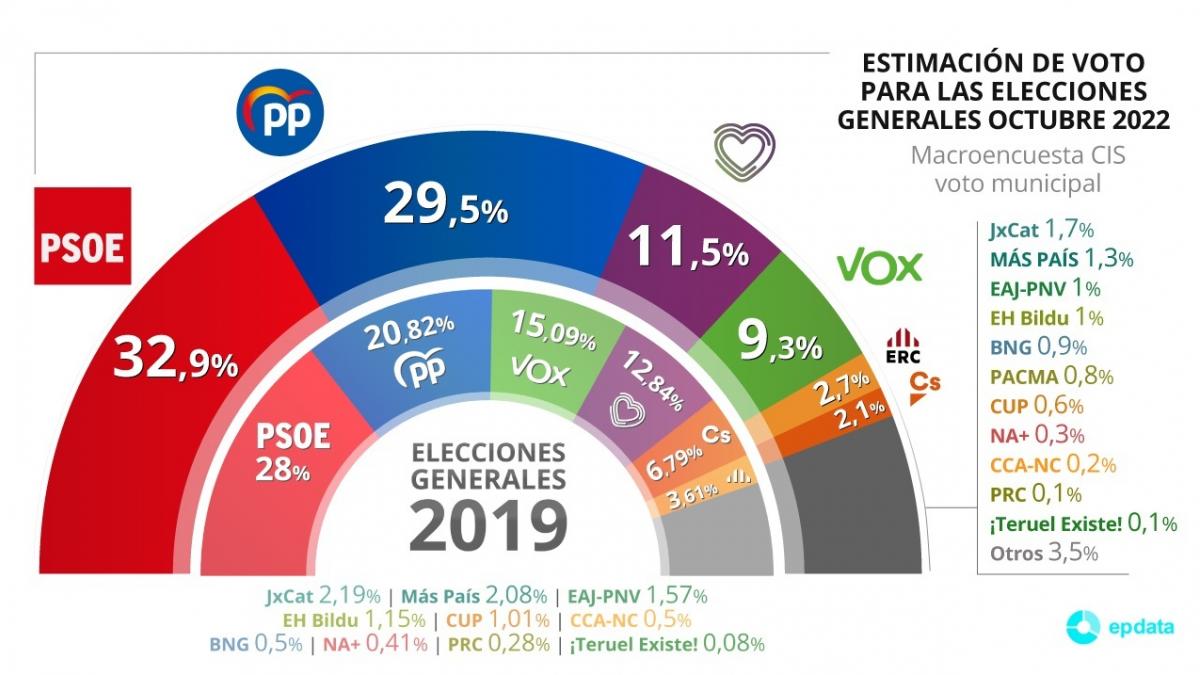 The PSOE would win the municipal elections with the 32.8% of the votes and it would be six points above the Popular Party, according to a ‘macro-poll’ published this Friday by the Center for Sociological Research (CIS) directed by José Félix Tezanos. The same survey reveals that, if held general elections at this time, the distance would be shortened and the popular they would remain three points behind: 32.9% of the votes would go to the Socialists, compared to 29.5% that the Popular Party would receive.

The data published by the CIS with seven months to go before the local elections -scheduled for the end of May- show a 8.7% voting intention for United We Can and 5.9% for Vox. Looking ahead to the general elections, the formations would obtain, according to the CIS, 11.5% and 9.3% of the votes, respectively. The CIS study is based on 5,557 telephone interviews in 1,488 different municipalities. The period in which the calls were made coincided with the second debate held by Pedro Sánchez and Alberto Núñez Feijóo in the Senate.

The data from the Tezanos CIS are similar to those reflected in the October barometer, in which they gave the PSOE 32.7% of voting intentions and 28.7% for the PP. The survey reflects, yes, a higher growth of the PP at the national level. Estimates also point to a slowdown in the fall of VOX, which took 8.8 points in October and rises 0.5 points in this survey. United We Can lose 1.2 points compared to the previous survey. Ciudadanos would obtain the vote of only 2.1%.

As for the municipal elections, when they were held in May 2019 they gave victory (in absolute terms) to the Socialist Party, which obtained 29.26% of the votes. More than a million and a half votes above the Popular Party, which received 22.23% of the votes. The intention to vote increases compared to the last municipal ones, despite the fact that he is not the favorite in Barcelona and has not presented his candidacy for Madrid. The loose third place of Ciudadanos, which obtained 1.87 million votes, has become a sixth place, behind Esquerra Republicana de Cataluña. While ERC would remain, according to the CIS, 3% of the vote, the orange formation would remain at 2.3%. The Más País formation, which obtained 2.08% of the vote in the 2019 general elections, would remain at 1.3% in general elections if they took place today.

Brazil, a bicentennial that passes without penalty or glory | International

Alexa already has a male voice: this is how you can change it

The last refugees fleeing to kyiv: “Bohdanivka was full of Russian soldiers” | International

Spain puts its potential to the test in the Wheelchair Basketball Nations Cup
November 1, 2022

Belén Esteban, very complicit with Raúl Prieto, dedicates the most special message to him on social networks
September 30, 2022

Belén Esteban, very complicit with Raúl Prieto, dedicates the most special message to him on social networks

Chavismo and the Venezuelan opposition get closer to resume negotiations in Mexico | International
May 18, 2022

A civil guard from Valladolid kills his ex-partner in Brussels and tries to commit suicide
October 28, 2022

The journalist and television presenter Ángel Casas dies at the age of 76
October 1, 2022

The B-side of Christmas in Vigo: "Instead of living it intensely, we suffer it"
1 week ago

The B-side of Christmas in Vigo: "Instead of living it intensely, we suffer it"

Vodafone launches an outlet for electronic devices
4 weeks ago