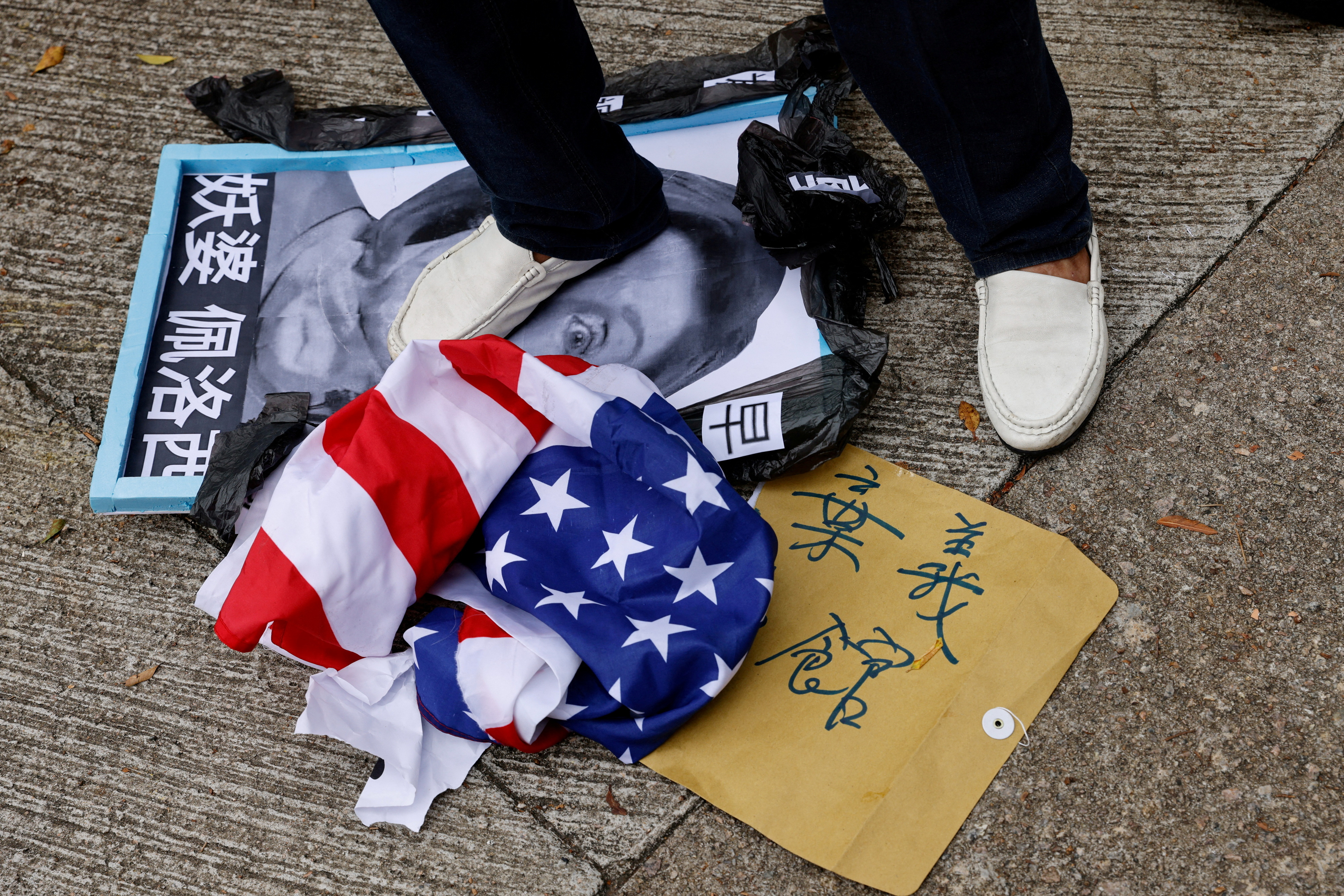 The visit that concluded this Wednesday to Taiwan by Nancy Pelosi, president of the US House of Representatives, has brought back to the present the conflict that pits China against Taiwan, an island that it considers an inalienable part of its territory. “The United States has come to make it clear that we will not abandon Taiwan,” Pelosi said. This support has infuriated the Chinese rulers, who warn Washington of “playing with fire” and threaten a forceful response to what they consider a provocation by the United States. The keys to a conflict that, Despite lengthening since the end of World War II, it has worsened in recent years as a result of the greater assertiveness of Xi Jinping’s China in defending its interests and a progressive distancing of the Taiwanese from the giant on the other side. of the Strait of Formosa.

What consequences could Pelosi’s visit to Taiwan have?

The Speaker of the US House of Representatives is the highest-ranking US politician to set foot on the island since Newt Gingrich’s 1997 visit. At the time, China was in the process of integrating Hong Kong, which had been a British colony since 1898, and she chose to swallow her anger. In addition, the Republican Gingrich, then also president of the House of Representatives, traveled under the Administration of the Democrat Bill Clinton, which from China was interpreted as an internal struggle between the two parties. Pelosi, by contrast, is a Democrat, as is the current president, Joe Biden.

In these 25 years, China has become a much richer country, much more armed and showing less patience with Taipei, which, according to Beijing’s perspective, has no right to cultivate its own foreign relations. That high foreign officials visit the “rebel” territory is interpreted as a show of support for its independence.

China has been warning for weeks that it is firmly opposed to the visit and that it will not hesitate to take “forceful measures”. Beijing on Tuesday announced new military exercises around Taiwan over the next few days, including some with missiles. The air and maritime space of the province of Fujian (the closest to Taiwan) has been opened exclusively to the Army.

In addition, it has prohibited the importation of products from more than a hundred Taiwanese companies in the food, agriculture and fishing sectors. Analysts anticipate an increase in the number of Chinese Army exercises in the region and the approval of new Chinese sanctions against the island. They see, however, that the escalation of tensions is unlikely to trigger a military conflict.

Which is the status quo from Taiwan?

Taiwan is not a special administrative region of China, Hong Kong and Macao, but functions as a State de facto, which has a democratically elected Government, a Constitution and an Army with some 300,000 active members. Taiwan is also the 21st world economic power, and leader in the semiconductor industry, an area in which it occupies more than 65% of the market share.

China, however, considers the island a “rogue” province whose government is “illegitimate.” The diplomatic relations of the Asian giant with the rest of the countries are based on the principle of one chinawhich means precisely that: there is only one China, and this includes Taiwan.

The Taiwanese issue has been a constant in the politics of the Chinese Communist Party, although the discourse has hardened since the current president, Xi Jinping, came to power. The main objective of the Chinese Government is to stop any possibility of a formal declaration of independence and gives primacy to peaceful “reunification”, although it does not rule out the use of force as a last resort. In Xi’s own words, reunification is “a historic mission of the Party.”

Has Taiwan historically been part of China?

Taiwan was under full Chinese rule between 1683 and 1895, during the Qing dynasty. In 1895, after China’s defeat in the First Sino-Japanese War, the country was forced to cede the territory to Japan.

With the end of World War II in 1945, the Republic of China – winner of the conflict, on the side of the allies – obtained the consent of the United States and the United Kingdom to govern the island. After the victory of the Communist Army in the Chinese civil war in 1949, the nationalist leaders fled to Taiwan, where Chiang Kai-shek established the Government of the Republic in exile. On the mainland, Mao Zedong declared the founding of the People’s Republic of China.

The United Nations stopped recognizing Taiwan as a sovereign state in 1971, the year in which it transferred diplomatic recognition to Beijing. Since then, the number of countries that have established bilateral ties with the People’s Republic of China to the detriment of the Republic of China (Taiwan’s official name) has been increasing. Currently, only 13 nations and the Vatican maintain diplomatic ties with Taiwan rather than China.

What are the interests of the United States?

China and Taiwan are separated by a distance of 160 kilometers through the Strait of Formosa. Taiwan is part of what is known as the “first chain of islands”, which includes a series of archipelagos that are traditionally considered “friends” of the United States and are key to the power game in Asia-Pacific.

The United States has always maintained an “unofficial” relationship with the island and defends its “strategic ambiguity” through the “Taiwan Relations Act”, approved by the US Congress in 1979, the year in which it recognized the government in Beijing as the Chinese representative.

Precisely because of this “ambiguity”, the Taiwanese question has become one of the most delicate points and one that generates more tensions and disagreements between the two main world powers. Washington is Taiwan’s main arms supplier and, as Biden has said openly on three occasions —although immediately corrected by his press team—, it would be its greatest military ally in the event of a war with China.

What do the Taiwanese want?

According to a June 2022 study, the vast majority want to keep the status quo indefinitely. Only 5.2% support independence, while 1.3% aspire to reunification with China. In terms of nationality, more than 60% of the population identify as Taiwanese, while just over 30% identify as Chinese-Taiwanese.

that the crisis does not affect infant feeding

This is how you should decorate your house this Christmas, according to a specialist
3 hours ago

By admin
Recent Posts
Latest News
Facebook Twitter WhatsApp Telegram
Back to top button
Close
Featured Posts
They are looking for a neighbor of Villanueva who disappeared a week ago
October 22, 2022

Brussels opens the way to withhold funds for Hungary as punishment for violating the rule of law | International
April 5, 2022

Israel torpedoes to the end the reactivation of the nuclear agreement with Iran | International
August 24, 2022

Public Mirror | Susanna Griso to Víctor Manuel, about Sabina’s statements: “You tell me now that you have become right-wing and I drop a myth”
1 week ago

Public Mirror | Susanna Griso to Víctor Manuel, about Sabina’s statements: “You tell me now that you have become right-wing and I drop a myth”

In Italy the situation is serious but it is not serious | Opinion
July 16, 2022

The protest in Buenos Aires for the economic crisis, in images
August 18, 2022

The protest in Buenos Aires for the economic crisis, in images

“I know your mother very well…”
3 weeks ago

“I know your mother very well…”

Presidential elections in Chile: the crucial points of the second round between José Antonio Kast and Gabriel Boric | International
March 8, 2022

Presidential elections in Chile: the crucial points of the second round between José Antonio Kast and Gabriel Boric | International

Referendum: The new Constitution of Tunisia sharpens the division of the country | International
July 27, 2022

Referendum: The new Constitution of Tunisia sharpens the division of the country | International

“Toledo is like a biker club, there is only metal and facades”
4 weeks ago

“Toledo is like a biker club, there is only metal and facades”