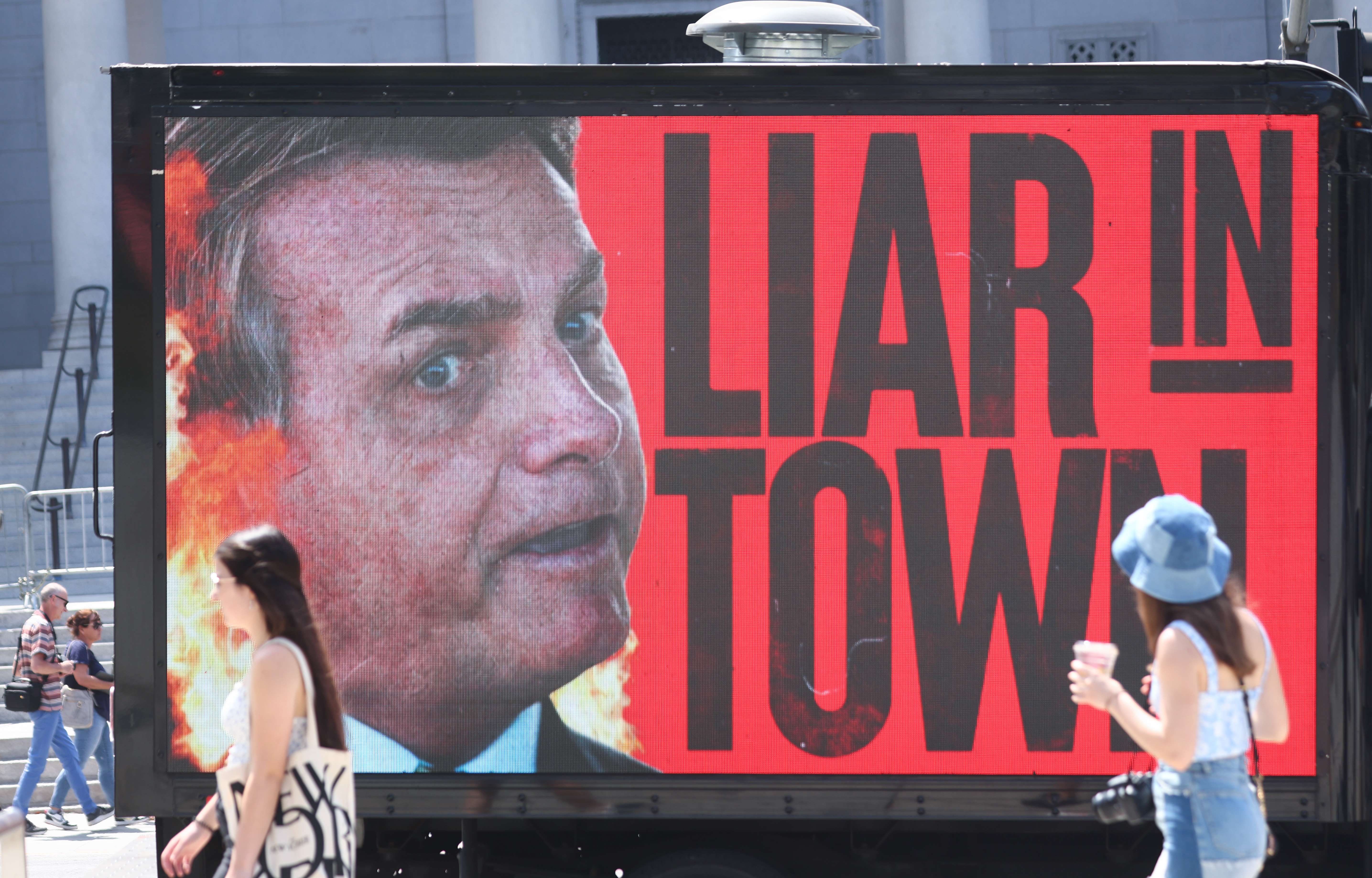 Western democracies live in a time marked by the deep impact of national-populist forces, which have conditioned the collective future from power or significantly influenced public debate. The tide embodied by this political family experienced an impressive rise in the second half of the last decade. British citizens began the great earthquake by voting in favor of Brexit, another month of June, that of 2016. Months later, Donald Trump conquered the White House. Other great successes followed. The Austrian and Italian far-rights managed to return to power in their respective governments as strong minority partners and, in 2018, Jair Bolsonaro won the presidency of Brazil. Today, significantly, all the protagonists of that great boom are out of power or in serious difficulty.

Boris Johnson, great standard-bearer of Brexit and symbol of the drift of the once pragmatic British Conservative Party, has emerged this week badly injured from a motion of censure raised by his deputies in the midst of the scandal of the parties held in Downing Street during the confinements. Also this week, Trump, who lost the 2020 presidential election, observes the beginning of the public sessions of the parliamentary committee that investigates the assault on Capitol Hill that coincided with that defeat; and Bolsonaro, who faces the campaign for re-election, which will be decided in October, with unfavorable polls, had to cope with the publication, on Wednesday, of disastrous data on the increase in hunger in Brazil, a setback of three decades. Meanwhile, Matteo Salvini and his La Liga party are languishing in the polls far from their heyday a few years ago and the Austrian FPÖ are in opposition. The picture is reinforced by the defeat of another national-populist who was in power, the Slovenian Janez Jansa, recently defeated in the legislative elections of his country.

Of course, other representatives of this political family – Fidesz in Hungary, the PiS in Poland or the Brothers in Italy, for example – are having a good time. Although the unfavorable circumstances of several protagonists do not mean the decline of the ideology, the ebb of the tide in its most prominent front does expose problematic features of this political universe: the weaknesses in the exercise of power, the complex dilemmas that every time increasingly global poses for the nationalist discourse and the wear and tear that these formations entail for democracy. The withdrawal of the tide leaves the field very muddy.

Two preliminary considerations are appropriate to analyze a complex phenomenon. One, substantial. “It is necessary to underline, from the outset, that within this political family the difference between small far-right parties, which have been gaining strength over time, and traditional center-right parties, which have been turning towards national-populist positions”, points out Giovanni Capoccia, professor of comparative politics at the University of Oxford who is currently developing a project on democracy and the extreme right.

The other, temporary. “If you look at the time course, one characteristic of these formations is a high level of fluctuation,” says Daphne Halikiopoulou, Professor of Political Science at the University of Reading and co-author of the study. Understanding right-wing populism and what to do about it (published by the German Friedrich Ebert Foundation), which underlines the importance of taking this broad perspective into account. In it, he comments, not only electoral results should be used as a measure of success. “Their position and influence in political systems is also important. Regardless of the ups and downs, there are assets like your standardization or as the adoption of their ideas by other parties”.

The wear on power

Within this analytical framework, Beatriz Acha, professor at the Department of Sociology and Social Work at the University of the Basque Country and author of Analyze the rise of the extreme right (Editorial Gedisa), points out some vulnerabilities that have been especially exposed in the group of historical radicals who have come to the fore. “Some of these formations suffer from a lack of cadres to effectively manage the exercise of power. On the other hand, the rabidly anti-system discourse, which they raise when they are in the opposition, exposes them to a contradiction that is difficult to manage when they reach power and enter the system. In addition, they tend to be parties with very marked hyper-leaderships, which can complicate the replacement process when a leader is politically beaten”, he comments.

The traditional parties that have veered towards national populism, such as the Republicans and the ToriesOn the other hand, they have vast quarries and experience. However, eccentric leaderships can also make them pay tolls that would have been avoided with the usual ones, in multiple ways, either by elevating untrained figures to key positions, removing expert personalities from their environment, breaking traditional practices and, in general, promoting a great mobilization in the opposite side. The Trump and Johnson administrations have accumulated major scandals. That of Viktor Orbán, who has just achieved a strong revalidation, too. In his case, the value of exception to the ebb of the populist tide is questioned by the clear deterioration of Hungarian democracy under his command, which alters the processes, and which led to the OSCE (Organization for Security and Cooperation in Europe) to not declare the elections fair. Therefore, it is a fairly relative exception to the pattern set by the other cases mentioned.

The dilemma in the global age

Another issue of great importance is the political fit of these groups in a time marked by Russia’s war in Ukraine and by global challenges. In the first case, the past sympathies of many —although not all— formations of this political family with regard to Vladimir Putin represent a burden. “The topic of war is terribly uncomfortable for them. But I have doubts about what real impact it can have in the sectors that agree with the rest of his ideas. I think not many would withdraw their support for this issue,” says Acha.

Capoccia agrees with this observation, although he adds a nuance: there will probably be no impact on the traditional bases or on certain social sectors, but this element may represent a brake on expansion into other areas. The Austrian FPÖ fell into disgrace precisely because of a Russia-linked scandal – before the invasion – and Salvini is in deep trouble over the whole Russian question. Last week an attempted trip to Moscow caused embarrassment and a strong controversy in his party.

However, the affair did not seem to affect Marine Le Pen in the French presidential elections in May. Acha observes that, although there is a problem linked to past sympathies with Putin, this is rather diffuse and, instead, the very specific crisis of the cost of living is a powerful missile that these formations can use from the opposition.

Apart from the Russian question, international politics presents a fundamental problem that practically all these formations face with a great dilemma, and that Capoccia points out. “The dilemma for them is whether, to what extent, to play the nationalism card in a situation marked by global challenges like the current ones.” Until now, the idea of ​​nationalism has worked well for them as a response to problems that came from globalization. But now, in frameworks such as the EU or NATO, the advantages of integration are very evident. “Playing the nationalist card is risky in this context. But moving away from there means cutting with the roots”, says the professor. One example is Le Pen’s proposal to withdraw France from NATO’s integrated command. To what extent to continue on this type of path? How to get away from them?

Another aspect that is evident in this phase of difficulty – after the rise of the populist extreme right in recent years – is the deep democratic erosion that these experiences entail. Not only in the internal dimension, with the exercise of power, with at least polarizing measures and often considered by opponents, judicial bodies or international organizations as harmful to the democratic fabric; but also in a toxicity that extends over time. Similar to the one propagated by Trump after the defeat, with his insistence on the delegitimization of the 2020 elections; or as the case of the British Boris Johnson, who is preparing this Monday to give the green light to the unilateral abandonment of parts of the Protocol on Northern Ireland that he himself signed with the EU. An earthquake flavored as a diversion, to distract from other problems. The damage is serious, not only to democratic functioning itself, but also to citizen confidence in democracy. A recent study by the London School of Economics points to a decline in satisfaction with democracy among voters from other parties, coinciding with the prominence of far-right formations. The study was conducted among voters in the UK and Germany.

Several of the great protagonists of national populism face difficult hours. And almost all of its representatives face serious dilemmas. But absolutely nothing excludes that another great flood of that tide will soon arrive.

The seven municipalities of Spain with average incomes that exceed 2,000 per month

Legislative elections in Colombia 2022: how, when and where to vote | International

What is the paradox of the “pet effect”, or believing that pets are a cure for health
September 29, 2022

What is the paradox of the “pet effect”, or believing that pets are a cure for health

The Morancos tell in ‘El Hormiguero’ the incident that happened to them with a taxi driver
October 5, 2022

1938, the Night of Broken Glass: never-before-seen photographs of the Holocaust
3 weeks ago

1938, the Night of Broken Glass: never-before-seen photographs of the Holocaust

“She deserves another kind of man”

Vilda renews the women’s team without the 15 critical players and without Jenni Hermoso
September 30, 2022

The European Commission is inclined to accept the candidacy of Ukraine and Moldova to join the EU | International
June 13, 2022

War in Ukraine: The dust produced by the movements of the Russian Army increased the radioactivity in Chernobyl, according to the IAEA | International
April 1, 2022

War in Ukraine: The dust produced by the movements of the Russian Army increased the radioactivity in Chernobyl, according to the IAEA | International

Mercadona cookies for Christmas that sweep for less than two euros