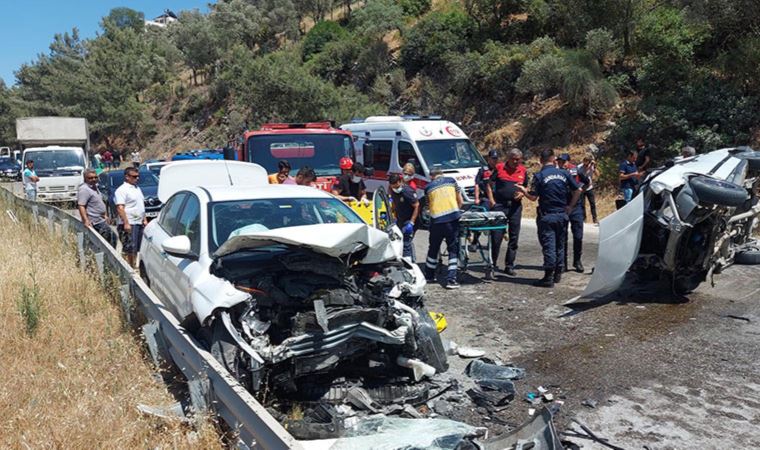 The accident occurred at around 15.00 today in Gölköy Mahallesi, Bülent Ecevit Street. Allegedly, the car with the license plate of 35 AUL 334 used by Şerif Aydın and the car with license plate 48 AHA 303 under the direction of Ferdi Öztaşkın collided with the car coming from the opposite direction.

Osman Settled and Ogulcan Settled, who were in the vehicles with both drivers, were injured in the accident. Upon the notification of other vehicle drivers passing by, many health, fire and gendarmerie teams were sent to the region. The traffic flow was controlled by the gendarmerie teams. The first aid was given at the scene and the injured were taken to the surrounding hospitals. Osman Settled, whose condition was serious, could not be saved despite the intervention of doctors. It was reported that the treatment of the other 3 injured continues.

The traffic flow, which was provided in a controlled manner due to the accident, returned to normal after the cars were removed from the road.

The investigation into the accident continues.

New development regarding the attack on cemevis in Ankara

“You don’t have any responsibility for these images?”

Amusement train derails at the amusement park in Giresun: 4 injured, 1 seriously
1 hour ago

Minister Çavuşoğlu met with his Kuwaiti counterpart in Morocco

Putin sends a “message” to the Russian special forces in Ukraine
February 27, 2022

Putin sends a “message” to the Russian special forces in Ukraine

Ukrainians killed and injured in missile strike on border post

Natural gas decision from Turkey and Russia: Payment will be made partially in rubles
4 days ago

Natural gas decision from Turkey and Russia: Payment will be made partially in rubles

They poisoned our water, our land; power is watching!

Sadness and grief.. Russian athletes comment on the war
February 25, 2022

Sadness and grief.. Russian athletes comment on the war

Warning to Istanbulites from İSKİ: Do not dump sacrificial wastes here
July 6, 2022

Warning to Istanbulites from İSKİ: Do not dump sacrificial wastes here

An upcoming summit between Putin and Biden if Russia does not invade Ukraine
February 21, 2022