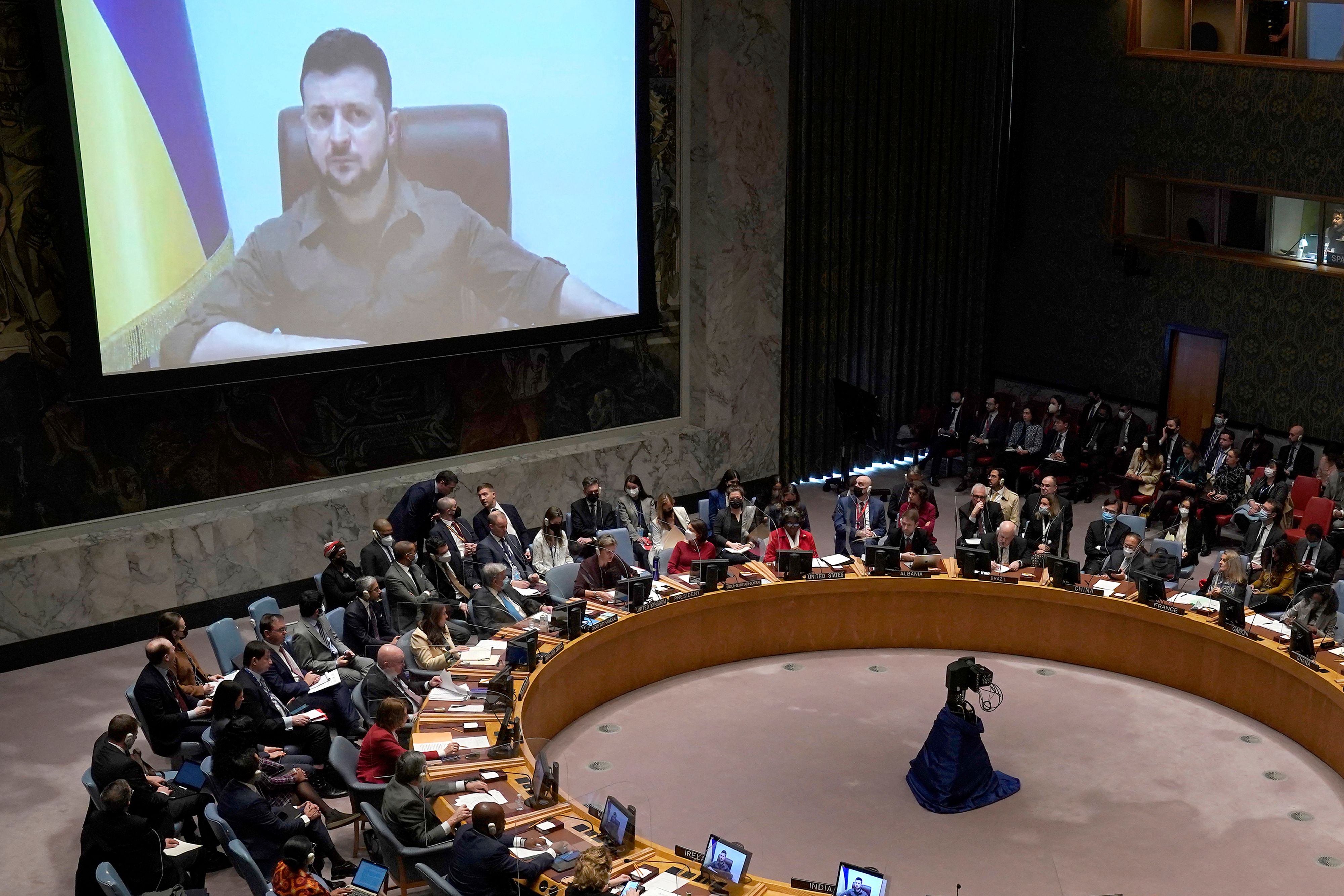 The Ukrainian president, Volodímir Zelensky, addressed the United Nations Security Council, meeting in New York, by videoconference on Tuesday to demand that its members find a way to hold Russia responsible for the “worst war crimes since the war”. WWII”. With the startling images still fresh from Bucha, a kyiv suburb occupied by Russian troops until their expulsion last weekend, Zelensky has called for reforming the body’s functioning so that Russia’s right of veto, a permanent member of the Council of Security, no longer a “right to kill” in Ukraine. And he has suggested the creation of a court “like the one in Nuremberg”, which prosecuted the crimes of Nazism after the Allied victory in 1945. “If the Security Council fails to hold Russia responsible, it will show that it is a useless body”, he has sentenced. “Are you ready to close down the UN? Do you think that the time of international law has passed? If your answer is noThen they must act immediately.”

The Ukrainian president has offered a summary of what he was able to verify on Monday on the ground in Bucha: “There is not a single crime that [el Ejército ruso] did not commit there.” Zelensky has spoken of the murders of “whole families, of women and children”, of victims whose bodies “have tried to burn” after being executed. “There were civilians shot in the neck, lying in the streets, dead in their homes.” He has stated that he has evidence that some of these crimes have been committed by the invading troops “just for fun” and that there have been “rapes of women in front of their children.” He has also assured that “2,000 Ukrainian children” have been kidnapped during this war. He has also predicted that crimes like Bucha’s “will be seen in more places in the country”, because, he added, “his goal is to leave it in ruins”, “full of mass graves”.

After his speech, Zelensky announced the projection of a video that the members of the Council saw minutes later due to a technical problem. It contained terrible images taken in Irpin, Dimerka, Mariupol or Bucha, with burned bodies, groups of executed men on their knees, with their hands tied behind their backs, lifeless women lying in the streets or the corpses of naked children. “The images are heartbreaking,” said Barbara Woodward, British ambassador to the UN, after seeing the video. “Speaking in a national capacity, we are shocked by what we have seen and reiterate our solidarity with Ukraine.”

This Tuesday was one of the most important speeches that the Ukrainian leader has given since the beginning of the Russian invasion on February 24. Zelensky has addressed the American, British or Italian parliaments and even the audience at the Grammy Awards. Following his appearance by videoconference before the UN, he addressed the Spanish Congress, where he made a comparison between what his country is suffering with the bombing of Guernica, during the Civil War. “We are in April 2022, but it seems April 1937.”

The appearance before the UN has come amid calls by some of the 15 members of the Security Council, led by the United States and its European allies, to demand responsibility for the atrocities committed by Russian forces. France, the United Kingdom, which was inaugurated as rotating president of the Council, and the United States have come to the meeting with what they consider evidence of these atrocities.

Washington’s ambassador to the UN, Linda Thomas-Greenfield, has said that suspending Russia from the Human Rights Council is something within the reach of the General Assembly. “Her participation of her undermines the credibility of that body”, she has sentenced. US President Joe Biden did not hesitate to describe on Monday as “war crimes” the military operations carried out in northern Ukraine, from where Russian troops have been expelled in recent days, after fierce resistance. of the Ukrainian army.

It is highly unlikely that the Security Council will adopt any resolution due to the veto enjoyed by Russia, a permanent member. The Kremlin denies that any crime has been committed, and this Tuesday defined the accusations as “a monstrous set-up” designed to “denigrate” its army. Vasily Nebenzya, its ambassador to the United Nations, has repeatedly accused Ukraine since the invasion began of lying about the reality of the war, drawing parallels with the US invasion of Iraq. This Tuesday he protested because the presidency of the Council, which corresponds to the United Kingdom, has not agreed to convene a meeting to deal with the “terrible provocations” of the Ukrainian army.

Nor is support expected from China, another permanent member, which has spent the seven weeks since the war began avoiding an open condemnation of the aspirations of President Vladimir Putin, a strategic ally of Beijing. India, for its part, has abstained in previous votes.

António Guterres, Secretary General of the United Nations, said in his introductory speech: “I will never forget the horrible images of civilians killed in Bucha. I am also deeply shocked by the personal testimonies of rape and sexual violence that are now beginning to come to light.”

Guterres has defined the war in Ukraine as “one of the greatest challenges to the international order”, due to its “nature, its intensity and its consequences”. The secretary general has also focused on the effects of the conflict “in developing countries, with more than 1,200 million people vulnerable to rising prices, energy and fertilizer costs.” “We are already seeing how some of those countries are moving from vulnerability to open crisis, with growing signs of social unrest.”

The United States Secretary of State, Antony Blinken, told reporters shortly before boarding the plane that took him to Brussels for a NATO meeting: “What we have witnessed in Bucha is not the isolated act of a unity [militar]; is due to a deliberate decision to kill, torture, rape and commit other atrocities”.

is in Madrid and seeks to help young people and singles

By admin
Recent Posts
Latest News
Facebook Twitter WhatsApp Telegram
Back to top button
Close
Featured Posts
A man dies in a patrol car in Brazil where policemen locked him up with tear gas | International
May 27, 2022

Pellet, firewood… or how to spend the whole winter with 600 euros in heating and without frights
October 19, 2022

Pellet, firewood… or how to spend the whole winter with 600 euros in heating and without frights

War in Ukraine: An overwhelming prospect of crisis | Opinion
May 14, 2022

War in Ukraine: An overwhelming prospect of crisis | Opinion

The European Parliament asks to include Schröder in the black list of the EU for being in the pay of Russian companies | International
May 19, 2022

Ukraine and Russia are preparing to sign a possible agreement to unblock the export of Ukrainian grain | International
July 22, 2022

The change of military posture in NATO and its challenges | Opinion
June 29, 2022

The change of military posture in NATO and its challenges | Opinion

The essential requirements to have a dog in Spain

Borodianka, the psychological trail of a massacre | International
August 16, 2022

Borodianka, the psychological trail of a massacre | International

Disappeared on the front line of a war in the Amazon | International
June 12, 2022